Home » About Us » History

It is believed that the City of Carlisle has its origins around the year AD 82, which makes it officially one of Britain’s oldest cities. The Cumbria Park Hotel is situated in the “village” of Stanwix, which although cannot claim to be quite as old as the 1st Century, there is no doubt that not many years later a Roman Fort was established in this area.

Many archaeological “digs” within our district have revealed foundations which extend to some 9 acres, roughly within a perimeter bounded by Mulcaster Crescent (the road at the side of the hotel), Kell’s Place, Well Lane to Brampton Road, and thence along to the tennis courts, with Church Street as the cross street of the Fort.

PEEK AT THE PAST

The History of the City

The historic Roman city of Carlisle – The Great Border City – is a bustling centre with a strong identity and an uncompromising motto in its Coat of Arms – “Be Just and Fear Not”. It enjoys excellent road links with three M6 junctions (42, 43 and 44) as well as being a main station on the West Coast Main Rail Line. Carlisle’s pedestrianised city centre contains an award-winning shopping precinct and a wide range of shops, pubs, restaurants and night-clubs.

Carlisle’s exact early history is unknown but by 79 AD the conquering Roman Army established the garrison town of Luguvalium, where the city now stands. From here Hadrian’s Wall was constructed – Britain’s most spectacular memorial to the Roman Empire.

For 800 years, the city wandered between the warring kingdoms of England and Scotland – the reason it is not included in the Doomsday Book. William the Conqueror’s men didn’t miss Carlisle – it simply wasn’t governed by England at the time. Border terrorism was at its height during the 17th century’s Border Reiver wars where villainy, murder, rape and pillage were everyday occurrences. Carlisle Castle – constructed from stone taken from Hadrian’s Wall – was at the centre of power struggles when Elizabeth 1 imprisoned Mary Queen of Scots inside the fortress.

Later, the city was caught up in the Civil War. Carlisle, a Royalist stronghold, was besieged by the Parliamentarians and a tight blockade eventually brought the city to its knees. The continuing struggle for the Crown saw Carlisle surrender to Bonnie Prince Charlie during the Jacobite Rising of 1745, only to see the Duke of Cumberland regain the city weeks later in bloody fashion.

The Industrial Revolution of the 19th Century brought thriving businesses and prosperity to Carlisle and it became an important textile manufacturing centre and rail hub. In 1838 the first West/East rail link between Carlisle and Newcastle was opened and by 1878 seven rail companies operated from the city’s Citadel Station. The world famous Carr’s biscuit manufacturers started life in Carlisle – the subject of a recent book by novelist Margaret Foster – and the international Metal Box Company has its origins in the city.

OUR LITTLE BIT OF HISTORY

Stanwix, the area in which the Cumbria Park now sits was originally known as the ‘Petriana’ which was the largest Roman fort on Hadrian’s wall. The fort is understood to have been established to guard the Eden bridgehead and watch the important western route to and from Scotland.

Because of the size of the fort, it is agreed to have housed a Calvary regiment, one thousand strong. This was almost certainly the ‘Ala’ Petriana, the sole regiment of this size on the wall. This was a distinguished auxiliary regiment, whose soldiers had been made Roman citizens for valour on the field of battle.

During organized excavation work undertaken by the Carlisle archaeological unit in June 1984, a section of the outer wall of the Roman fort was found. It was established that the Northern wall ran right through the hotel’s rear car park. Whilst the business was unable to leave the excavation open, markers can be found in the car park alongside further information. Many photos of the original dig can also be viewed in the hotel.

It was in January 1967 that we purchased the end Victorian townhouse, No2 Mulcaster Crescent, which cornered on to Scotland Road for £4,100.00. This was converted into a small guest house with 5 guest bedrooms and opened in June 1967, when you could get bed and breakfast for 21 shillings per night. It was a humble beginning, plastic sauce bottles were used on the tables, nylon sheets (1 pair per bed) 6d (old pence) in the slot for the television. Tea (from a large pot) and biscuits were served in the lounge at 9 pm each evening.

When we were expanding the hotel car park in 1984, remains were revealed of Hadrian’s Wall and Petriana Fort. A 30 foot stretch of the wall was then excavated and archaeologists took many finds to the Tullie House Museum for the exhibition. We now have two sections now visible of the Roman wall along the back wall that connects the hotel to Stanwix Junior School, please ask at Reception and we can show you photographs taken at the time of the excavation in our Hadrian’s and Cumbria Suites. In fact, we had the authorisation to be able to use some of the stones from the Wall that had fallen into the Vallum and they are situated under the bar in our Hadrian’s Suite.

The conservatory was built in 1985, in its centre was an old Victorian well, however in March 1995 it was dismantled and money collected from it was donated to a local Hospice. The table that now takes its place is still known as the “Well” by the staff!

In 1988 we demolished 6 bedrooms in the building at 2 Mulcaster Crescent and built a new block of 19 bedrooms at a cost of £400,000.00 and when the hotel was upgrading we lost a further 10 bedrooms and this then left a total of 51 bedrooms. The front wall was built in 1990, to effectively join the houses together.

By the hotels ‘Thirtieth Anniversary in 1997, the hotel comprised of a total of 7 terrace houses. No 2 Mulcaster Crescent and No 34,32,30,28,26 and 24 Scotland Road and our address are now known simply as 32 Scotland Road. With the many varying projects over the last 32 years to date, you now find the prestigious 3 stars, 47 en-suite bedroom hotel that we have here today, also including an excellent 150 seater Restaurant, 6 meeting/conference rooms and spaces for 40 vehicles in the car park at the rear of the hotel. The hotel has always been keen to incorporate a local and Roman theme, you may notice that our Conference/Function rooms are named thus; Hadrian’s Suite – after the wall, Petriana Suite – the Roman fort, Cumbria Suite – the county, Stanwix Suite – the village and Eden Suite – the main river flowing through Carlisle.

In the last couple of years, we have recently bought the next 2 houses along (No 18 & No 22 Scotland Road – curiously no No 20 exists) with the prospect of extending the hotel. It is hoped that we will be able to increase our number of bedrooms again, create new conference rooms and – more excitingly – develop a new hotel Health and Leisure Club. And now we find that there is another part of the outer wall of the Petriana fort in the grounds of these newly acquired properties. (Petriana was the largest Roman Fort along Hadrian’s Wall and was as a very important garrison fort for a 1000 strong cavalry). It is because of this that we are at a standstill with the construction of our Leisure Club – as we wait for English Heritage and the Archaeologists to assess the situation. As our Roman remains are the only significant section of Hadrian’s Wall in Carlisle, we also hope that we will be able to make a special feature of them in our car park in the not too distant future to take us forth into the next century and chapter of our history!!!

At last! The long-awaited Leisure Club opened its doors January 2001, now named “Toria’s Leisure”, named after the owner’s daughter, grand-daughter, “VICTORIA” who tragically died in 1996, aged 19 years. The Leisure Club boasts a 13 station gym, steam room, Jacuzzi and sauna, it also has a fast tanning sunbed. In addition to our new gym we have a further six bedrooms and a new executive conference room which is air-conditioned, called the “Lowther Suite”, being the owner’s surname, all created from No 18 & No 22 Scotland Road.

The owners, now say they have finished extending.

Over the past few years, however, the business had come into some financial difficulty. The principal owner had neglected to re-invest in the product and develop the services that are demanded of a modern-day business. This led to the property being marketed and the business was sold onto Cumbria Park Enterprises in July 2012.

Cumbria Park Enterprises has traded and developed the business. Work has begun on refurbishing all 53 bedrooms and public areas, the aim of the company is to re-establish the business and bring it back to its former glory. On the back of success experienced through re-investment in the product further work is being carried out on developing gym and leisure facilities and we are now able to offer full training facilities as well as the use of its Sauna, Steam room and Jacuzzi.

These improvements and effort of the team have all contributed to the business being approached to join the internationally recognised Best Western brand (which we turned down) and also attaining a certificate of excellence from TripAdvisor.

If you have any queries in regards to our hotel or would like some more information regarding a booking, please feel free to get in touch with us using our contact form below!

Private rooms are available for all types of celebrations.  Our menus are tailored to suit your requirements so contact a member of the team for further information.

Click on one of our conference suites for more information.

* Estimated floor plan, is indicative only. 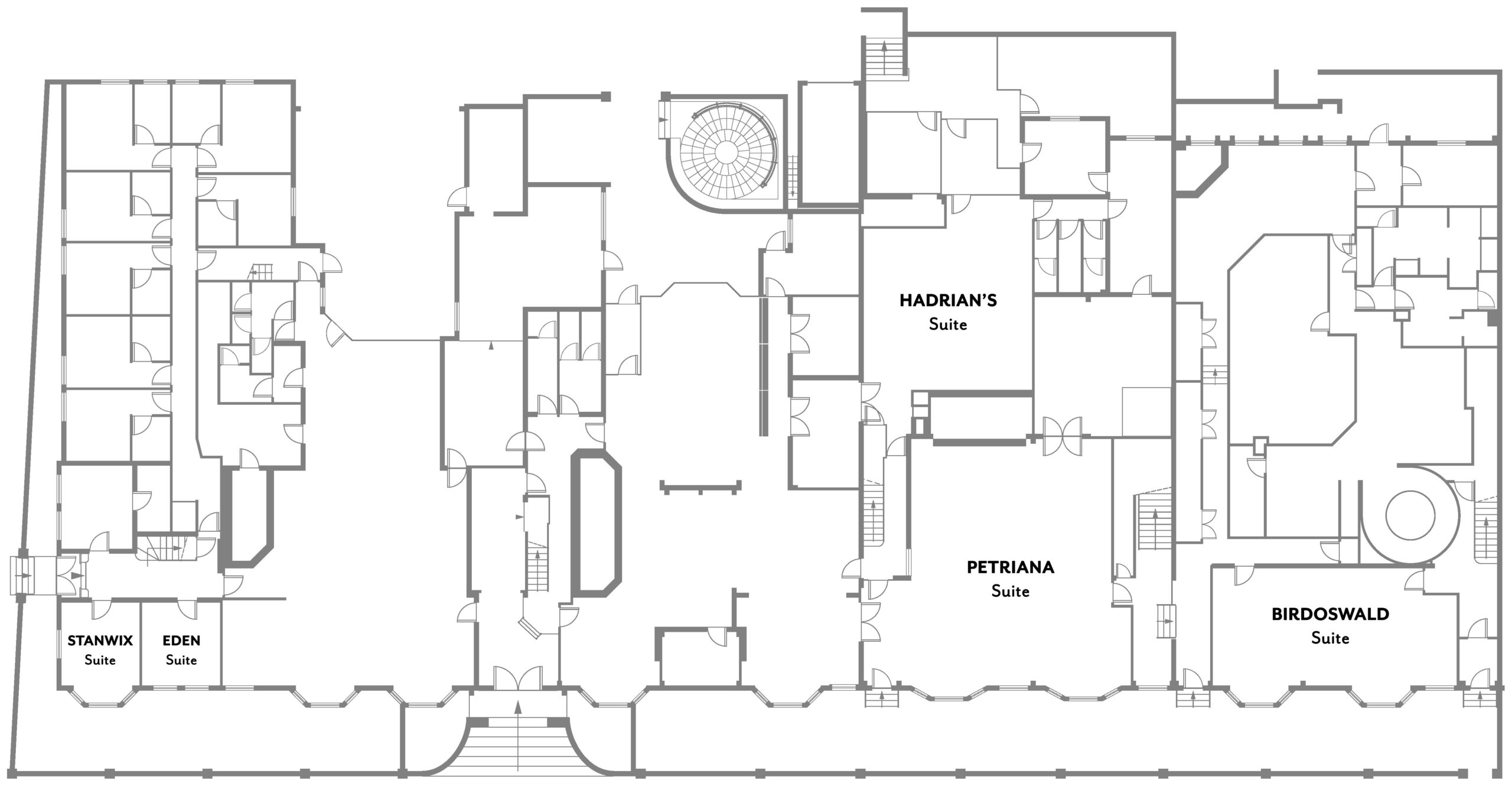 To book a room for a conference or meeting, please simply fill in the form and we will get back to you with confirmation of your reservation.

We are sorry to announce that all events have been postponed for the time being.

NEW DATES TO BE CONFIRMED SOON.